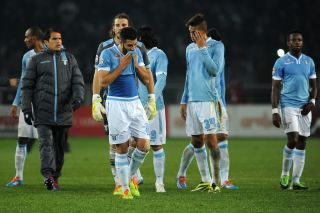 The 68-year-old was announced as Vladimir Petkovic's replacement on Saturday and will be looking to turn around the club's fortunes after a disappointing run of form that has seen Lazio win only twice in their last 12 Serie A games.

Reja had an eventful two-year spell as Lazio coach between 2010 and 2012, when he guided the club to a fourth-placed finish and into the UEFA Europa League, but his tenure also included threats to resign.

Inter arrive in the capital on the back of victory over city rivals Milan prior to the mid-season break and Walter Mazzarri's side have only lost once in their last 10 league matches.

That win at San Siro moved Inter into fifth, but the side's recent record against Lazio suggests they face a tough start to 2014. Lazio, who are 10th, have won the last three meetings between the two teams and four of the last six.

Lazio have also not had any problems finding the net on a regular basis this season, scoring in 13 of their 17 Serie A matches. However, along with Verona, Lazio have conceded the most goals of any of the top-10 sides in the league with 26.

That record does not bode well ahead of the visit of the top-flight's second-highest scorers in Inter, who have plundered 37 goals.

Midfielder Ricky Alvarez has found the net four times in his 15 appearances and the Argentina international is confident Inter are moving in the right direction.

"We need to keep doing what we're doing, more like the first few games of the season when we didn't concede many goals and scored a lot," he told Sky Sport 24 ahead of the game. "I think that's the ideal situation.

"We're all players who are more attacking than defensive-minded and we need to work on that, if all three of us are picked together we need to learn more in that area, then it's up to the coach to pick the team."

Alvarez returns from suspension for the match and Diego Milito may also be fit following his thigh problems, but Inter will be without Saphir Taider, Cristian Chivu (both thigh) and the suspended Hugo Campagnaro.

Lazio have injury concerns over Stefan Radu ahead of the clash. The Romania international defender missed training with a muscle problem, but the club are still hopeful he will be able to play some part.