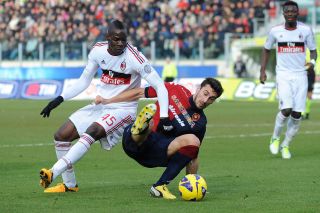 Massimiliano Allegri's side were stunned 2-1 on the opening day, with veteran striker Luca Toni's double handing them a poor start to the season.

Milan bounced back in the UEFA Champions League four days later though, defeating Dutch side PSV 4-1 on aggregate to ensure their progression to the competition's group stages.

Mario Balotelli was on the scoresheet, while Kevin-Prince Boateng struck a double in the 3-0 second-leg win.

The Ghana international's goals proved to be his last for the club though, with the 26-year-old completing a move to Bundesliga outfit Schalke on Friday.

Milan replaced Boateng quickly though, as Alessandro Matri arrived at San Siro on the same day from Juventus.

And the club's vice-president Adriano Galliani has compared the player to popular club icon Filippo Inzaghi, who retired last year.

"Matri will get the number nine jersey," Galliani confirmed to the club's official website.

"His arrival reminds me of Pippo Inzaghi’s, 12 years ago. He was more or less the same age when he came to us."

Young midfielder Ricardo Saponara has resumed training although he is unlikely to be fit in time for the match.

Sunday's clash at San Siro will see Allegri lock horns with a club he both played for and managed, with Cagliari having made a winning start to Serie A this season.

After their surprise 2-1 Coppa Italia exit to third-tier Frosinone, Cagliari came from a goal behind to beat Atlanta 2-1 on Sunday.

Cagliari have lost their last nine Serie A matches against Milan at San Siro and striker Marco Sau is aware that claiming an upset will not be easy.

"I think Milan will try to make the game and we have to be ready. Our attitude will count a lot," he told Cagliari's official website.

"Balotelli is obviously the number one danger, but ... we're talking about a very strong team, with players of great class that can hurt (us) at any time."