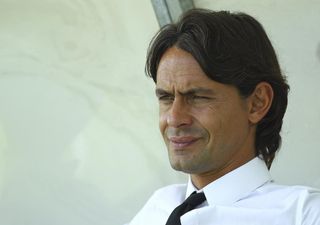 Milan finished eighth, a point and a place above Lazio, after a season that saw Clarence Seedorf replace Massimiliano Allegri at the helm in January.

Seedorf has been succeeded by another Milan great in the form of Inzaghi and the former Italy international will be tasked with returning the Serie A giants to happier times, specifically European competition.

Seven league wins from nine at the end of last season were not enough to lift Milan into the UEFA Europa League, and there have been plenty of comings and goings at San Siro during the transfer window.

Robinho and Mario Balotelli have both moved on, with Inzaghi able to bring in the likes of Alex and Jeremy Menez.

Andrea Poli, who enjoyed a promising debut campaign with Milan last term, is aware that a positive result against Lazio on Sunday would serve as an ideal start for Inzaghi.

"Against Lazio it will be the first match of a new movement, we want to win," said Poli this week.

"We want to start on the right foot to give a positive boost to the whole environment. With Inzaghi we have started on a new path, we are trying to improve the team and we are doing just that step by step.

"We want to get to Sunday against Lazio in the best possible shape. I think the spirit of the team is fundamental, trying to be compact and tough."

Stefan de Vrij, Filip Djordjevic, Dusan Basta and Marco Parolo have all been recruited over the close-season, with Pioli also seeking to re-establish his club in European competition.

"So far I have seen a friendly and dedicated team ready with great desire to show we are better than last year. I am convinced that we will do well," he told Lazio Style Radio.

"The new players and coach have brought enthusiasm and desire.

"It's up to us to prove that we are stronger: we hope to start on the right foot and bring Lazio back to the top."