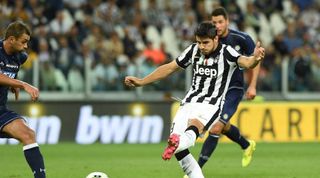 The league leaders, who visit Cagliari on Thursday, were held to goalless draw at Fiorentina before Sampdoria came from behind to snatch a point at Juventus Stadium on Sunday.

Another draw - at home to Atletico Madrid in the UEFA Champions League last Tuesday - contributed to what is now a three-match winless run, and the Turin outfit will be keen to rediscover their winning ways.

Morata arrived from Real Madrid for a reported fee of €20million during the close season, and has managed to score four goals in 10 appearances so far this term.

Three of those goals came from the bench, however, and the Spaniard is eager to force his way into the first team.

"I'm very happy to be playing for Juventus," he told Sky. "I'm at the best club in Italy and one of the finest in Europe. We've got through to the Champions League last 16 and are top of the pile in Italy.

"I'm pleased about the opportunity I've been afforded. I could have scored a few more goals though. I've played some decent games but found myself up against goalkeepers in good form.

"It's harder to score in Italy. In Italy the defenders are more experienced and know how to defend better, especially against teams at the top like Juve, where they know they need to defend well if they're going to take points off us.

"It's different tactically in Spain. Everyone charges forward with little thought for the defence and holding positions. I need to adapt because the difference is pretty evident.

"There are certain details the manager and his coaching staff run through with me and when I'm able to carry them out better, I'll be able to improve even further."

Coach Massimiliano Allegri will be absent from the touchline after being handed a one-match touchline ban for his altercation with match officials following the clash with Sampdoria, although the club have since launched an appeal.

Another coach set to serve a ban is Roma's Rudi Garcia, who - after being "aggressive" towards a steward at Genoa - will serve the first match of a two-game suspension as his side host Milan on Saturday.

The men from the Stadio Olimpico are currently one point off the lead and hold a nine-point advantage over third-placed Lazio, who visit Inter on Sunday.

Beleaguered Parma appointed a new president this week, but remain seven points adrift of safety as they prepare to visit Napoli on Thursday.

Cesena are without a win since the opening weekend of the season and travel to Sassuolo on Saturday, while fellow strugglers Chievo face Verona in the Derby della Scalla.

After the forthcoming round of fixtures, Serie A will pause for a winter break.