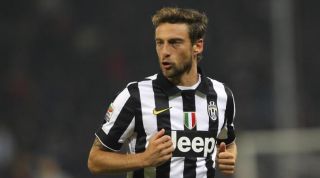 Juve have not won at Stadio San Paolo since 2000, losing on five of their seven visits since.

Massimiliano Allegri's men head to Naples one point clear of Roma at the summit after being held to a 1-1 draw at home to Inter last time out, while Napoli are a further nine points adrift in fourth.

Despite Juve's poor run at this weekend's hosts, Marchisio is hopeful of reversing the trend against a team who have lost just one of their last 14 matches in all competitions.

"It's always difficult to play at the San Paolo and it's been a long time since we last won there," he told the club's official website. "Napoli are a great team, but we want to buck the trend and are ready to go for the win."

These sides will be more than familiar to each other having met in the Supercoppa Italiana in Doha just last month.

Napoli won that match on penalties after the sides were tied at 2-2 after extra time, and Juve have managed just one win from their last six fixtures in all competitions, but Marchisio has dismissed talk of a crisis at the Turin club.

"We're always spoken about and that’s a good thing because we’re clearly out at the top and enjoying a great season," the Italy midfielder added.

"It's true that we could have handled certain games in a better fashion, but any talk about physical or psychological problems is truly wide of the mark - we've always crossed the white line with the right attitude and always put in the hard yards.

"There are bits and pieces to improve, but thankfully we've currently got the time to work on them.

"During a season there are moments in which a team goes through peaks and troughs, but when you play such important games as the one against Napoli, everything that came before goes out the window, because you're always psychologically fired up for the encounter."

Juve are not thought to have any fresh injury concerns ahead of Sunday's fixtures, with Andrea Barzagli, Kwadwo Asamoah and Romulo among their long-term absentees.

Defender Martin Caceres was deemed fit enough for the bench at the Inter match in midweek, having not featured since October due to a thigh injury.

Napoli, meanwhile, are easing Juan Camilo Zuniga and Lorenzo Insigne back into training after their respective injury lay-offs.