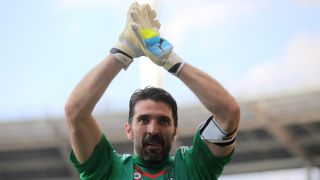 Juventus moved closer to a fifth successive Serie A title with a 4-1 derby victory at Torino, while Gianluigi Buffon set a new league record for the longest run without conceding a goal at 973 minutes.

Buffon's historic run was ended by Andrea Belotti's penalty after 10 clean sheets, but Juventus eased to victory on Sunday.

First-half goals from Paul Pogba and Sami Khedira were followed by a brace from substitute Alvaro Morata, although Khedira was shown a late red card for dissent.

Juve's top goalscorer Paulo Dybala, who returned from a calf injury to start, lasted only half an hour before limping off but Massimiliano Allegri's side have now won 19 of their last 20 league matches, a run that started with a 2-1 win against Torino at the end of October.

Gonzalo Higuain took his league goals tally to 29 with a brace as Napoli stayed three points behind Juventus by coming from behind to beat Genoa 3-1.

Tomas Rincon's long-range strike put the visitors into a shock 10th-minute lead but Higuain struck twice in the second half and Omar El Kaddouri added gloss to the scoreline in injury-time.

Fiorentina missed the chance to close the gap on third-placed Roma in the race for the final Champions League qualification place as they were held 0-0 at Frosinone.

Carpi moved out of the relegation places with a 2-1 win at bottom side Verona, Kevin Lasagna's free-kick giving his side a vital three points in their survival battle.

Luigi De Canio's first game as Udinese coach ended in a 1-1 draw at Sassuolo after Duvan Zapata's opener was followed by Matteo Politano's header and Chievo moved into the top half of the table with a 1-0 win at Sampdoria.

Atalanta broke their run of 14 league matches without victory with a 2-0 home win against nine-man Bologna, who had Ibrahima Mbaye and Daniele Gastaldello sent off.