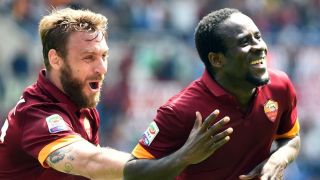 Roma took advantage of a slip from Lazio to move back into second place in Serie A with a 2-0 win over Genoa.

After dropping to third a month ago, Rudi Garcia's men have waited patiently for their opportunity to move back into the automatic UEFA Champions League places and got their reward on Sunday.

Goals from Seydou Doumbia and Alessandro Florenzi were enough to seal all three points at the Stadio Olimpico, with Lazio subsequently drawing against relegation-threatened Atalanta.

Giuseppe Biava shocked Stefano Pioli's side as he opened the scoring four minutes after the break with a close-range header against his former employers, just reward for Atalanta after dominating the first half.

Felipe Anderson and the fit-again Filip Djordevic led Lazio's fightback, but it was Marco Parolo who rescued the point with an acrobatic volley 13 minutes from time.

Fiorentina moved above Sampdoria – who lost to Juventus on Saturday – after ending their four-game losing streak in the league with a 3-1 win over Cesena.

Alberto Gilardino and a double from Josip Ilicic were enough to seal the win and push Cesena closer to relegation. Domenico Di Carlo's side are now nine points from safety with four to play.

Antonio Di Natale became the sixth highest goalscorer of all time in Serie A with his 206th goal in Udinese's 1-0 win over nine-man Verona - the veteran overtaking Roberto Baggio with a deft back heel from six yards.

And Inter were held to a goalless draw by Chievo in a blow to Roberto Mancini's hopes of securing a UEFA Europa League spot.