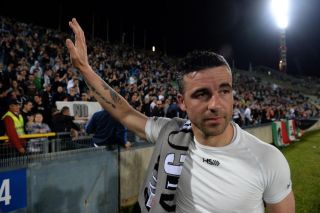 Di Natale pledged to end his glittering career at the end of the current campaign but his future remains in a state of flux, with the Udinese board and coach Francesco Guidolin seemingly convinced he is open to a change of heart - something the 36-year-old confirmed after the match

He certainly appears equipped to continue at the highest level after netting a trademark treble in a game that Sampdoria twice led, taking his overall Serie A tally to 193 goals - six of those coming in Udinese's last three outings.

After the match, Di Natale told Sky Italia: "I am having fun, now I want to go on vacation with my wife after two charity games.

"It's a shame the season is ending now, as I am in good physical shape and enjoying myself, but we'll see, I'll try to continue. I hope to continue."

A marvellous Di Natale free-kick levelled matters and Udinese led in the 32nd minute when Roberto Pereyra slalomed through the Sampdoria defence to leave the veteran with a routine finish.

Vincenzo Fiorillo then produced a double save to deny Di Natale and the man of the moment whistled another free-kick narrowly over the bar as Udinese threatened to run riot.

But it was then the visitors' turn to flip the match in their favour and Sinisa Mihajlovic's team led 10 minutes after the interval.

Okaka picked out Eder, who sprung the offside trap to slot past Zeljko Brkic. Less than two minutes later, Okaka was again the provider and Roberto Soriano rounded Brkic to make light of a difficult angle.