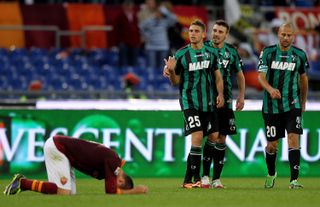 Rudi Garcia's league leaders went in front through Alessandro Longhi's first-half own goal but Berardi, a 19-year-old on loan from Juventus, levelled in the 94th minute.

Having triumphed in their first 10 games, a Serie A record, Roma are now winless in two, while Sassuolo have climbed out of the bottom three.

Reigning champions Juventus moved to within a point of Roma with an emphatic 3-0 victory over fellow high-fliers Napoli.

Angelo Ogbonna was sent off late on for Juventus but it did not dampen the mood in Turin as the Bianconeri maintained their 100 per cent home league record this season.

Giuseppe Rossi scored twice in the first half, taking his tally to nine for the season, as Fiorentina overcame Sampdoria 2-1.

Rossi netted his first from the spot after 11 minutes and bagged a second six minutes later.

Manolo Gabbiadini replied for Sampdoria, but could not prevent a third successive defeat.

Verona's recent good run ended at Genoa, who ran out 2-0 winners thanks to first-half goals from Daniele Portanova and Juraj Kucka.

Parma are without a win in three but ended a run of two straight defeats as veteran Alessandro Lucarelli's equaliser earned a 1-1 draw with Lazio.

Chievo remain bottom after a goalless home draw with Milan that saw two men sent off in the closing stages.

Riccardo Montolivo saw red for Milan, who are now winless in four, when picking up a second bookable offence in the 83rd minute and Sergio Pellissier was dismissed for the hosts in injury time.

Conti's first came just before half-time and he had the last laugh with a late free-kick following Ciro Immobile's equaliser.

Elsewhere, Marko Livaja struck a winner right at the death to give Atalanta a 2-1 victory over Bologna.

Davide Brivio gave the home side the lead after 74 minutes, but his effort was quickly cancelled out by Rolando Bianchi.