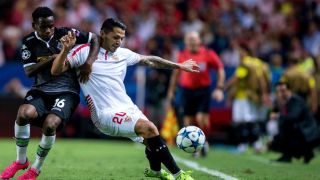 Sevilla winger Vitolo has warned Group D rivals Manchester City and Juventus that the Spanish club are ready to fight their way through to the Champions League knockout phase after beating Borussia Monchengladbach 3-0.

Unai Emery’s side qualified for Europe’s premier competition thanks to their Europa League success last term, and they were rewarded with arguably the toughest group.

Premier League giants City, Serie A champions Juve and Monchengladbach – who finished third in the Bundesliga – are the other teams vying for the top two spots in the pool, though Sevilla’s straightforward victory on Tuesday suggested the Germans will not be troubling many.

Second-half penalties from Kevin Gameiro and Ever Banega sent Sevilla on their way, before Yevhen Konoplyanka’s fluke effort at the end sealed an easy win and Vitolo, who played a starring role, is adamant his team are capable of progressing.

He told UEFA.com: “It was very important for us to win this game and I’m sure it will go a long way towards helping us in our coming games in the league and in the Champions League.

“We went for them from the kick off.  We have worked so hard to get here and we aren’t about to throw this opportunity away.

“We’re going to try and get through the group. We have a very good team and if we all run our hearts out and play together, we’re going to have a great year.”

Monchengladbach only tested Sevilla goalkeeper Sergio Rico for the first time in the final few minutes of the match at the Ramon Sanchez Pizjuan and Andre Hahn acknowledged that the Bundesliga side struggled.

He added: ”These 90 minutes were quite difficult for us.

“We knew what to expect. In the first half we defended quite well. We wanted to avoid any penalties, but in the second half we conceded two in three minutes.”