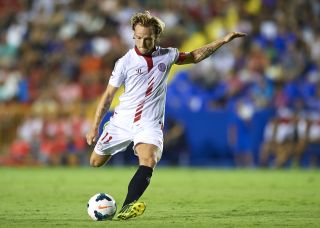 The 25-year-old Croatian sustained a groin injury during his country's 2-1 defeat to Belgium in their FIFA World Cup qualifier on Friday.

The problem was severe enough to mean Rakitic had to withdraw from Croatia's final Group A qualifying fixture in Scotland on Tuesday.

However, initial tests have revealed he did not suffer a tear, although he will continue rehabilitation with his club as he battles to be fit for the trip to Valladolid.

A statement on Sevilla's official website read: "Ivan Rakitic underwent an MRI today to check on the state of the muscle injury he suffered over the international break in a match between his native Croatia and Belgium.

"The footballer was unable to play in the ensuing game because of the injury and initial reports by the Croatian staff indicated that he didn’t suffer a muscle tear.

"Now in Sevilla, the club medical staff examined the player and determined that he will need to undergo additional tests to ensure that he is fit.

"The result of the tests confirmed that he had no such tear, but he will need to be monitored continually to avoid a setback.

"According to the Sevilla medical staff, because of the nature of the muscle it is difficult to establish a concrete timetable.

"Thus, Rakitic will have to continue his daily rehab to maintain progress before he can return to the pitch.

"The Croatian began his rehabilitation routine on Monday at the training ground, and he remains uncertain to start in the match this weekend against Valladolid."