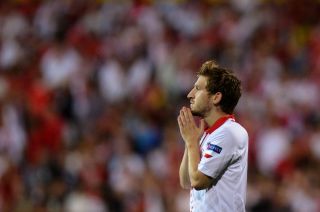 The on-loan Chelsea midfielder has undergone an MRI scan that revealed damage to his left hamstring, ruling the 24-year-old out for between three and four weeks.

It means that Marin could miss as many as four La Liga games, with Unai Emery's men 11th in the table and unbeaten in their last three league fixtures.

He is also likely to miss both UEFA Europa League ties against Slovan Liberec.

Marin has made 11 appearances for Sevilla since joining on loan from Chelsea in June, scoring twice.

Emery has been given some positive news, however, with Stephane Mbia able to train without pain ahead of an MRI scan to evaluate his recovery from a foot injury.

Kevin Gameiro (thigh) and Ivan Rakitic (groin) will continue to recieve therapy for their injuries.