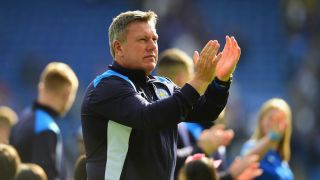 Craig Shakespeare is planning to meet with Leicester City's owners to discuss his future after finishing their campaign with a 1-1 draw against Bournemouth.

Leicester controversially sacked popular manager Claudio Ranieri in February despite last season's shock title win, with number two Shakespeare taking over as interim boss and steering the club away from the relegation zone.

Owner Vichai Srivaddhanaprabha intimated in his programme notes that Leicester are considering other options as well as Shakespeare as they build towards next season.

And Shakespeare, who saw Jamie Vardy level in the second half at the King Power Stadium after Junior Stanislas scored inside a minute for Bournemouth, gave little away on if he will still be in the hotseat next term.

"Yeah, I've read his [Srivaddhanaprabha's] programme notes, we'll sit down, there's no given time. It is the end of the season and yes I'll wait for that," he told Sky Sports.

"Of course they've made decisions for the future and good of the club, and I'll sit down and wait for them discussions."

Leicester were unfortunate not to win the match in a much better second-half showing that included Vardy having a goal harshly ruled out for offside.

But Shakespeare sympathised with the linesman, adding: "Yeah, I've just seen it and had a look at it.

"It's very hard to see in real time, I'll give the linesman that, but I think he's level."

For Bournemouth, a point secured a ninth-place finish in just their second season in the Premier League.

And boss Eddie Howe reflected: "It's a fantastic achievement, fantastic day for the club. When you consider our recent history and where we've come from and I don't think it should underestimated what's been achieved by this group of players.

"You don't get trophies or plaudits like you do for winning promotion or winning the league, but it should be recognised by everyone in the Bournemouth area how well they've done."

Asked if Bournemouth can improve further, he added: "Well that's the challenge, who knows if that's possible.

"I believe there's more growth in this team, more we can achieve. It's going to take hard work and some good work from us in the summer and hopefully we can do that."