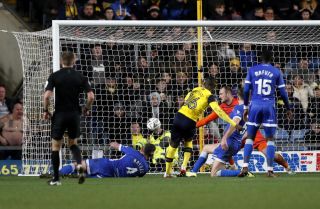 Pools threatened an upset as they led for 43 minutes at the Kassam Stadium before the League One high-flyers stormed back in the second half.

Mark Kitching pounced on a weak back-pass from Rob Dickie to slot past Jordan Archer in the ninth minute.

But Rob Hall equalised after 52 minutes with a curling shot from outside the area that bounced inside the far corner with keeper Mitchell Beeney unsighted.

Then in the 66th minute, young midfielder Baptiste lit up the match by dribbling past three defenders before shooting in from close range.

Hartlepool, who had beaten League Two Exeter in the previous round, threatened going forward.

But in the second half it was all Oxford and two late goals confirmed their passage.

Tariqe Fosu turned the ball in from close range after 84 minutes and three minutes later Matty Taylor blasted in from the penalty spot after Ryan Donaldson fouled Mark Sykes.