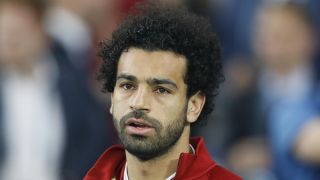 Xherdan Shaqiri is happy to join forces with Mohamed Salah after signing for Liverpool.

The Switzerland star knows Salah from his time at Basel, although they were not team-mates at the club.

Salah arrived after Shaqiri had departed, but the Egypt international will be a familiar face for the 26-year-old, as well as a rival for a place in the team.

After completing a reported £13.75million move from Stoke City on Friday, Shaqiri said he is looking forward to teaming up with Salah.

"I don't know him so well but he came for training and a trial when I was at Basel," Shaqiri told Liverpool's website.

"He came to train two or three times, I trained with him. Then I went to Bayern Munich and he stayed in Basel.

"I'm happy that I see him here. He had an amazing season last year and I hope he can do it this year too.

"I'm very happy for him that he had this beautiful season because he is a very nice guy, a good guy. The most important thing is for the club to work and he had an amazing season. Players are always sad when they don't win trophies but hopefully we can do it this year."

Shaqiri won the Champions League during his time at Bayern, while he collected a trio of Swiss Super League crowns at Basel, and the midfielder is targeting more titles having switched to Anfield to play under Jurgen Klopp.

"I want to win titles - that's my ambition," Shaqiri added. "I already know how to win from Bayern Munich, we won the treble and it was an amazing feeling.

"I'm confident we can win a lot of titles. The fans deserve to win titles. Hopefully we have a good season and try to be hungry to win titles.

"As a player you always want to be on the biggest stage in football. A few years ago I wanted to come too but it didn't happen. I'm really happy that now I’m finally here. I want to improve myself too, I want to be with the best and I want to win titles. That's what I'm here for.

"I know the coach from Germany, when he was at Dortmund. We played against each other – me with Bayern Munich – and they were always big games. That was a big point for me to come here, because of the coach.

"I love his football, how he plays and how he manages a team. I was always an admirer of his so I'm happy to reunite with him."