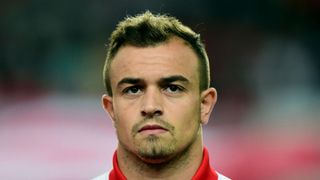 Xherdan Shaqiri remains committed to Stoke City, but could entertain a January return to Serie A with Roma.

The Switzerland international has emerged as a target for the Giallorossi, according to several reports in Italy.

An early-season struggle, which Shaqiri has missed much of through injury, leaves Stoke languishing second from bottom in the Premier League after seven matches with the division's joint-lowest goal tally.

According to his brother, Shaqiri is determined to lead a change in fortunes at the Bet365 Stadium, but the overtures from the Italian capital - and a possible return to continental action - could prove too strong for the ex-Bayern Munich attacker.

"I'm sorry if I cannot say much," Erdin Shaqiri, who also acts as his sibling's agent, told Corriere dello Sport.

"The only sure thing is that Xherdan focused on Stoke City. January is far away, there is time to understand the various options.