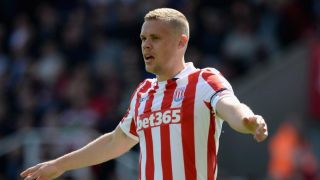 Ryan Shawcross is expected to be fit to resume pre-season training after missing Stoke City's opening friendly with a back injury.

Captain Shawcross has struggled with back issues over the past two seasons and caused concern when he fell awkwardly in training ahead of last weekend's 3-0 defeat to Burton Albion.

But assistant manager Mark Bowen insists the latest injury is unrelated to the defender's past problems and that he will be fit for Saturday's clash with Preston North End at Deepdale.

"Naturally we were worried at first, but it's nothing to do with his old injury," Bowen told BBC Radio Stoke.

"When he first went down we were thinking 'what the hell is this now?'. But it's just a little tweak in his back and he should be fit to train.

"As far as we're aware he's in the frame for Preston on Saturday."

Stoke begin their Premier League campaign away to new boys Middlesbrough on August 13.