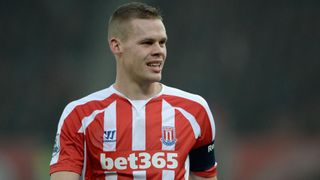 Stoke City captain Ryan Shawcross could be the answer to Liverpool's defensive woes according to former Anfield favourite Phil Thompson.

Liverpool take a 1-0 advantage into the second leg of their League Cup semi-final against Stoke on Tuesday and the visitors were hit with a blow on the eve of the game when it was confirmed Shawcross would miss out due to a back injury.

Mark Hughes' side have kept seven clean sheets in their past 13 Premier League matches with Shawcross starring at centre-back – a record sure to be envied by Liverpool, whose frailties at the back were once again on show during Saturday's astonishing 5-4 win at Norwich City.

Thompson feels Stoke will be hindered by the absence of Shawcross, who he would be happy to see donning Liverpool's famous red shirt in future seasons.

He told Sky Sports: "When Liverpool evaluate at the end of the season and look at the sort of goals they conceded, I wouldn't be averse to see them looking towards Shawcross as a solution.

"In fact, I think he would be absolutely ideal and he's been one of the most underrated centre-backs over the last five seasons. You just have to look at Stoke's stats with and without him."

Hughes believes Shawcross is not the only Stoke player to have proved himself to be at least the equal of Liverpool's current crop.

Stoke lost by the same slender scoreline at the Britannia Stadium on the opening weekend of this season, having dealt out a stunning 6-1 hammering as the curtain came down on 2014-15.

"We've proved we can cause them problems, albeit at Anfield we have not gone that final step and taken wins away with us. But we're really looking forward to it.

"It's not going to be easy. Liverpool at Anfield on any occasion is difficult but in a cup semi-final there is an extra challenge to everybody.

"You could suggest the pressure is on them."