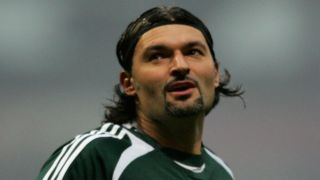 Srnicek died at the age of 47 on December 29 having suffered a cardiac arrest while jogging nine days earlier.

The former Czech Republic international represented the likes of Sheffield Wednesday and West Ham as well as Newcastle before assuming a coaching role with Sparta Prague.

Srnicek was remembered with a minute's applause at St James' Park before Newcastle's 3-3 draw with Manchester United on Tuesday, during which players from both sides wore black armbands.

Wednesday's service was attended by Newcastle players past and present, including Alan Shearer, Steve Harper, Shay Given and Rob Lee.

Speaking in a eulogy during the service, Harper - who first met Srnicek when he was just 17 - said: "You loved Newcastle, Pav, but I can assure you that Newcastle loved you.

After the service, Shearer added: "It's not surprising, but it's great to see so many old faces here today.

"People have come from all over the world, all over the country to be here, and that tells you what a nice, genuine, humble, honest, hard-working professional Pav was. He was great to be around."