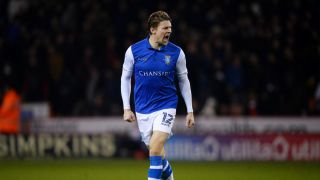 Jos Luhukay's first match in charge of Sheffield Wednesday ended with a hard-earned 0-0 draw at bitter local rivals Sheffield United despite defender Glenn Loovens getting sent off on Friday.

Wednesday went into the match in 16th place after just one win in their last five Championship matches and they made sure they dug deep to leave Bramall Lane with a share of the spoils, even though the hosts had a numerical advantage for the final 26 minutes.

It was generally a match of few chances, with neither side managing to get a shot on target in a turgid first half.

Things did liven up after the break, with Clayton Donaldson seeing a header tipped over by Joe Wildsmith early on in the second period, just a few moments before Daniel Pudil sent a curling effort just wide at the other end for the Owls.

Wednesday's chances suffered a major blow just after the hour when Loovens was dismissed for a second booking after tripping Donaldson out wide, and that allowed United to enjoy the better of things towards the end.

But United failed to take full advantage and were prevented from moving into the play-off places, while Luhukay - appointed following Carlos Carvalhal's departure on December 24 - gets his Wednesday tenure off to an encouraging start.