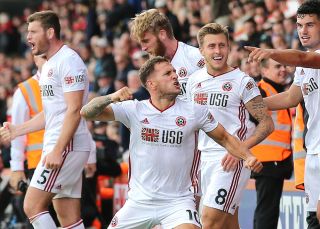 Sharp, a boyhood Blades fan, had been on the pitch just six minutes when he scrambled home from close range following a well-worked free-kick routine.

Chris Wilder’s visitors, back in the top flight for the first time since 2007, looked set to leave the Vitality Stadium empty-handed after defender Chris Mepham’s first Cherries goal.

The South Yorkshire club acquitted themselves well on the south coast and had the better of the chances before the deadlock was broken, with David McGoldrick twice going close.

Bournemouth handed a Premier League debut to goalkeeper Aaron Ramsdale against his former club. The 21-year-old was preferred to the experience of Artur Boruc and out-of-favour Asmir Begovic.

Ramsdale, bought from the Blades in January 2017 and loaned to AFC Wimbledon last term, was forced into a save with around 30 seconds on the clock after McGoldrick was released by John Lundstram.

The last time the two clubs met was for a League One fixture in February 2013, with Manchester United’s £80million defender Harry Maguire playing for the Blades.

Bournemouth dominated possession in the opening 45 minutes but failed to register an effort on target.

Callum Robinson, the only summer signing selected to start by Blades boss Wilder, saw an effort from distance repelled by Ramsdale, while Mepham sliced wide at the other end during an uninspiring first period.

Cherries boss Eddie Howe believes it will be the strongest squad he has managed once the absentees return to fitness.

Debutant Philip Billing finally produced the hosts’ first attempt on target, a powerful drive in the 59th minute which was turned away by United keeper Dean Henderson.

Wales centre-back Mepham, a £12million signing from Brentford in January, had registered his only previous senior goal against the Blades at Griffin Park in March 2018, and he repeated the trick in the 62nd minute.

Ryan Fraser’s right-wing free-kick was nodded down by Billing at the back post and, after an acrobatic attempt from Nathan Ake and Henderson’s save from Callum Wilson, Mepham powered in from close range.

With time ticking away, the 33-year-old Sharp, who struck 23 goals to help the Blades finish second in the Sky Bet Championship in 2018-19, proved his worth.

A short free-kick on the right was worked to the feet of McBurnie inside the box. The former Swansea forward scuffed his attempt but the ball broke perfectly for Sharp to sweep the ball into the bottom left corner.

The 88th-minute leveller prompted wild celebrations among the sold-out away end and secured a deserved point for Wilder’s men.