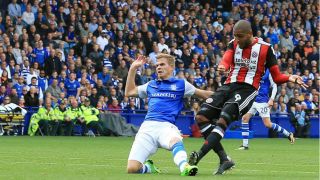 Meeting their rivals for the first time since February 2012, the Blades struck early through John Fleck and Clarke before seeing their lead wiped out by goals from Gary Hooper and Lucas Joao.

But Mark Duffy's superb strike - just four minutes after arriving from the bench - and Clarke's second saw United put four past Wednesday at Hillsborough for the first time, moving them up to fourth in the Championship.

Chris Wilder's men made a wonderful start, netting the opener inside three minutes through Fleck's pinpoint thump from David Brooks' lay-off at a set-piece.

The second goal followed in the 15th minute as Clarke pounced on a defensive error to roll a finish under Keiren Westwood.

The Owls hit back on the stroke of half-time as Hooper stole in to prod into the bottom-right corner, before Clarke passed up a gilt-edged chance to restore the visitors' two-goal advantage shortly after the hour-mark.

United were made to pay for that miss as substitute Joao thumped high past Jamal Blackman, but Duffy's brilliant twisting run and shot offered a rapid response.

Clarke then capitalised on more shoddy defending to clip a finish over Westwood and clinch the victory, with the jubilant Blades fans singing happy birthday to manager Wilder, who turned 50 on Saturday.

4 - Sheffield United have scored four goals away at Hillsborough against Sheffield Wednesday for the first time in their history. Clinical. September 24, 2017