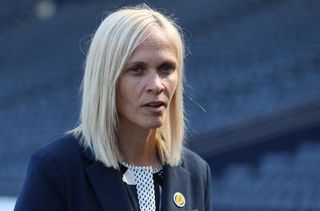 Shelley Kerr has been named on the shortlist for the Scottish Football Writers’ Association Manager of the Year award after leading Scotland to the Women’s World Cup finals.

Kerr’s rivals for the prize include last year’s winner, Kilmarnock manager Steve Clarke, while Professional Footballers’ Association Scotland Player of the Year James Forrest is in line for a double after being included on the shortlist for the SFWA player award.

Kerr has gained recognition after taking Scotland to this summer’s finals in France for the first time by topping their qualification group.

The 49-year-old is among the top four candidates voted for by the 111 members of the writers’ association.

Clarke is in line to retain the award after Kilmarnock broke their record top-flight points total for a second year running with two games to spare.

Dick Campbell is also among the nominees after leading Arbroath to the Ladbrokes League One title, while Gary Holt is included having guided Livingston to Premiership safety before the split.

Forrest won the PFA award on Sunday after netting 17 goals for Celtic this season, while midfielder Callum McGregor has shown his versatility and big-game mentality.

Morelos is among the candidates after netting 29 goals and Allan McGregor has made key saves following his return to Ibrox.

Motherwell pair David Turnbull and Jake Hastie are on the shortlist for Scottish Young Player of the Year.

Midfielder Turnbull has scored 13 goals in 28 Premiership games, while Hastie earned a summer move to Rangers after scoring seven goals in 14 matches for Motherwell following a loan spell at Alloa.

Aberdeen midfielder Lewis Ferguson is also on the shortlist after an impressive first season at Pittodrie, while Kilmarnock left-back Greg Taylor
has gained recognition after helping push the Ayrshire side to the verge of a European place.

Forrest could scoop another award after being named on the shortlist for the International Player of the Year. The winger netted five times in two games in November to fire Scotland to top place in their Nations League group.

Both Callum and Allan McGregor are also on the Scotland shortlist, along with captain Andy Robertson.

The winners will be announced over the course of next week and the awards will be dished out at a dinner at the DoubleTree by Hilton hotel in Glasgow on May 19.