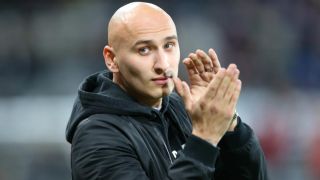 Newcastle United great Alan Shearer has questioned Jonjo Shelvey's attitude and insists the England international is fast running out of chances in the Premier League.

The 23-year-old watched on from the stands as Newcastle twice came from behind to earn a thrilling 3-3 draw with Manchester United, shortly after his transfer had been announced.

Shelvey arrives as a six-time England international and while Shearer does not doubt the former Liverpool midfielder's ability, Newcastle's all-time leading scorer believes the jury remains out.

"Swansea are in a desperate position in the Premier League, as are Newcastle. Why would Swansea let Shelvey go to one of their relegation rivals? So you'd have to say something is wrong with his attitude," Shearer told BBC Radio 5 Live.

"Surely, at his age, the penny has to drop. You have been in a Swansea team that struggled and you have had a chance at one of the biggest teams in the world [Liverpool].

"We all keep saying he is an England international and has ability but he has to take his chances, he's had two or three.

"He will not get a bigger opportunity than he has now at Newcastle. He is now at a huge football club where the fans will adore him. He hasn't got another opportunity after this. He has to do it here."