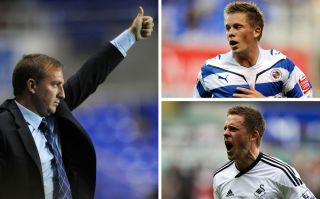 Having been with Reading since 2005, it was another four years before Sigurdsson broke into the Royals’ first team, under Rodgers’ tutelage.

Although the Northern Irishman’s Madejski Stadiium spell would only last six months, Sigurdsson continued to excel, scoring 22 goals in 51 appearances.

He netted Reading a cool £6 million by signing for Hoffenheim in 2010, yet Sigurdsson and Rodgers were reunited two years later when the Icelander joined Rodgers’ Swansea on loan and scored seven goals in 18 Premier League games to help the Welsh side finish 11th in their first top-flight term since 1982/83.

“He gave me my first chance in Reading’s first team and a proper chance to play there regularly,” Sigurdsson exclusively told FourFourTwo.

“I worked with him for six months, but things did not go as well as planned so Reading appointed a new manager. Brendan was also important for me when I came back [to England] to Swansea from Hoffenheim and he gave me my chance in the Premier League. For that I will always be grateful."

Rodgers was on the move again that summer, to Liverpool, and wanted Sigurdsson to join him, only for Tottenham Hotspur to offer the attacking midfielder a more attractive proposal. But the 26-year-old, now back at Swansea, only has good things to say about his former boss, who was relieved of his Liverpool role in October after 166 games in charge of the Reds.

“He is a fantastic manager," he said. "A very good man-to-man manager with players and I am sure he will be in a good job soon.”