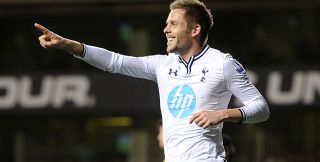 The Iceland international was hot property having joined Swansea on loan from Hoffenheim and scored seven goals in the space of 11 Premier League games.

While the South Wales outfit were keen to make his temporary transfer permanent, they weren’t Sigurdsson’s only suitors, with his former Swansea manager Brendan Rodgers interested in taking him to new club Liverpool.

However, it was Andre Villas-Boas who eventually made the attacking midfielder his first Spurs signing, and Sigurdsson insists the Londoners had always been his first choice.

“I think you can always be clever after making decisions, but at that time I really wanted to go to Tottenham,” he told FourFourTwo.

“I played with a lot of great players like [Rafael] Van der Vaart or [Luka] Modric and the club was bigger in terms of training ground and stadium.

"Also living in London made a big part of my decision. I do not regret it and I really enjoyed my time at Spurs. I improved a lot playing with big players.”

Sigurdsson’s spell at White Hart Lane didn’t exactly work out how he might have hoped, however, making more Premier League appearances off the bench (32) than from the start (26) and often finding himself playing out wide.

As a result, the Icelander called time on his Tottenham stay after just two seasons and returned to Swansea, where he has started 49 of his last 52 league games, scored 10 goals and assisted 11 more.

“I played a lot of games [for Spurs], probably not in my favourite position,” he said. “I want to play more through the middle. I am not the best in getting past the quick defenders on the wings, I would like to be more central, making passes and being involved in the play of the team. I would have liked playing more games in the middle. This is why I had to go to Swansea. I didn't want to stay on the bench for another year.

“There are a lot of new players from the first time I was there. It was more of a passing team under Brendan Rodgers, and now possession is not aim No.1. The team is more solid defensively. We don't let in as many goals as we did.”