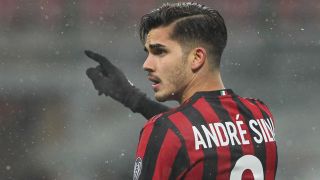 AC Milan team manager Christian Abbiati has assured striker Andre Silva he will get opportunities in the side, after he was again left out of the matchday XI.

The Portugal international, who has not started a match for Gennaro Gattuso's side since the 3-0 Coppa Italia win over Hellas Verona on December 13, was among the substitutes for Sunday's Serie A trip to Cagliari.

Silva's lack of involvement in the first team has led to speculation of a January move, with Arsenal said to be interested if they are unable to sign Pierre-Emerick Aubameyang from Borussia Dortmund.

Championship leaders Wolves have also been linked with a bid but Abbiati insists the 22-year-old's future lies at San Siro.

"Andre Silva is an amazing player and he works very hard," he told Mediaset Premium of the striker, who joined from Porto last year for a €38million fee.

"He is improving a great deal and will get his opening during what is a very intense part of the season.

"He came from Portugal and the football there is not as tough as Serie A, but we have great respect for his qualities."

Silva has failed to score in his 12 Serie A appearances but netted six goals in six games in the group stage of the Europa League.

Gattuso has favoured Nikola Kalinic at the spearhead of the attack since taking charge in November.