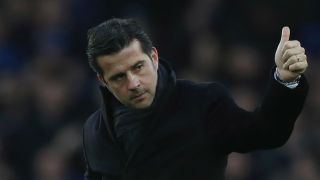 Everton manager Marco Silva is confident the club's hierarchy will deliver the transfer targets requested by the Portuguese.

The 41-year-old replaced Sam Allardyce at Goodison Park in May after previous links to the club when they parted with Ronald Koeman in October 2017.

But the former Hull City and Watford head coach has had a frustrating transfer window since arriving, with no new signings as yet and four players leaving the club, including Wayne Rooney and Ramiro Funes Mori.

Silva, though, remains confident that new arrivals will be at the club before the start of the new Premier League season.

"We have to do it. It's something we have to do," he told the Liverpool Echo.

"We have our targets and we have already decided the positions we want to improve in our squad.

"We believe in all of our players but, for sure, we will do that and we have decided our targets.

"Our board, our chairman, our sporting director, they are doing everything they can to give me the players I ask them for."