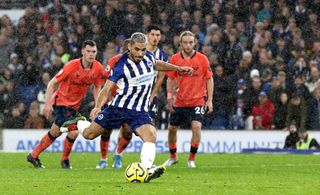 Marco Silva criticised the inconsistency of VAR after Everton conceded a contentious late penalty during their dramatic 3-2 loss at Brighton.

The Toffees became the first Premier League club to have a spot-kick awarded against them following an intervention from Stockley Park.

With Silva’s side leading 2-1 and on course for a first away win since March, referee Andrew Madley pointed to the spot on the advice of video assistant referee Lee Mason after Michael Keane inadvertently stood on the foot of Aaron Connolly.

Neal Maupay took full advantage of the opportunity by converting from 12 yards in the 80th minute, before Everton’s misery was compounded by a stoppage-time own goal from Lucas Digne.

Silva could not understand why his side were not given a penalty 15 minutes before Keane’s tangle with Connolly when Richarlison appeared to be pulled by Martin Montoya.

“They found one touch in the feet when the ball goes out. The ball was not even for Michael or for Connolly to take that ball, the ball was going out.

“The VAR can help, the VAR is a good thing in football, but we have to understand what is the way the VAR is going.

“They are here to help the referee. Why 15 minutes before did they not see the penalty on Richarlison?

“It was a tough game for the referee as well but why? They are watching there on TV, why didn’t they see the player pull with two hands on Richarlison?

“It was a clear penalty and difficult for us to understand why in some moments they whistle, the other moments they didn’t whistle.”

Substitute Dominic Calvert-Lewin looked set to earn the Toffees a rare victory on the road with a 74th-minute strike after Adam Webster’s own goal cancelled out Pascal Gross’ free-kick opener.

But their hard work was undone during a controversial final 10 minutes which piles the pressure back on Silva after the reprieve of last weekend’s win over West Ham.

The Portuguese coach, who did not engage with questions about his future, felt his team could have done more to hold on to their advantage.

“I know they are humans, in some moments some decisions can make you a little bit more nervous, not thinking,” he said of his players.

Brighton boss Graham Potter praised the fight of his players and admitted they were fortunate to take all three points.

“I think we’ve played better and not got anything. The spirit and personality of the players, which we’ve known has been there, shone through,” said Potter.

“It’s hard to turn a Premier League game around when you’re 2-1 down but they kept going.

“They found an answer, found a way. Maybe had a bit of luck but you need that to get three points in the Premier League.

“I feel for Everton because they put a lot into the game. Did they deserve to lose? No, but that’s football.”

Asked about the penalty award, he added: “When I’m watching it live, you don’t see anything. But apparently on VAR there’s a contact. But I haven’t seen the incident so I don’t know.

“Unfortunately we’re going to get harsh refereeing decisions because ultimately that’s still what it is, it’s somebody’s opinion.

“VAR is not the answer to everything, in terms that they’ll still make decisions.”