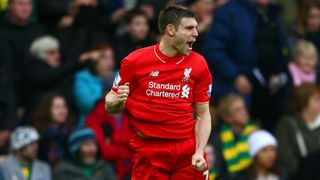 James Milner believes winning the League Cup would be a good start to silencing Liverpool's critics this season.

The former Manchester City midfielder will be hoping to help his new team to a Wembley final in the League Cup when they welcome Stoke City for the second leg of the semi-final.

Liverpool are in a strong position heading into the second leg at Anfield, having won the first 1-0 away from home thanks to a lone-goal from Jordan Ibe.

Jurgen Klopp's men are seventh in the Premier League table, eight points off Champions League qualification and 13 points off the summit.

But Milner said he and his teammates are not interested in what the critics have to say about their campaign.

"I’m not bothered by what the critics think," the 30-year-old said.

"It’s important to watch the game and listen to what the manager wants and what I think. Some people will say things just to be controversial and get under people’s skins.

"I understand that, I’ve been around the game long enough, and the most important people’s opinions are the manager’s and those of my team-mates.

"There are improvements to be made and we know where we need to get to. It’s not about ­writing off this season and saying, ‘We’ve changed the manager, let’s go again next year’.

"If we can win at least one trophy, while changing manager and with new players coming in during a year of transition, then we’ll be achieving something.

"We’re in a position in the league where, if we win a few games, we’ll be right up there. We’re one game away from Wembley, and still in the FA Cup and Europa League.

"We’ve got a lot to improve on and we’ve shown our performances can be very good. It’s about cutting the mistakes out and being consistent."