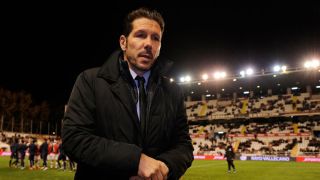 Atletico Madrid coach Diego Simeone praised the second-half improvement from his side in the 1-1 draw at Rayo Vallecano in the last 16 of the Copa del Rey.

The La Liga leaders were facing a second-leg deficit at the interval after falling behind to a rasping long-range effort from home left-back Nacho.

Simeone's much-changed side played with more cohesion after the break and the coach had a major impact on the outcome with an inspired double change.

Luciano Vietto comprehensively beat Nacho on the right flank and picked out Saul Niguez for his fellow substitute to clinically dispatch a fifth goal this season.

"In the second half we had more determination and made better decisions," Simeone told a post-match news conference.

"Rayo Vallecano is still a very dangerous opponent for the return match because they are not afraid and always play looking to be offensive. That allows them to create chances.

"Today was a hard-fought match but I think a draw is fair."

Simeone handed debuts to recent additions Augusto Fernandez and Matias Kranevitter and, although the midfield duo struggled to impose themselves as Rayo enjoyed the better of the opening 45 minutes, he saw some encouraging signs.

"They went from low to high," Simeone added.

"Matias was involved in the game quite regularly and Augustus played a correct match.

"Obviously, being their first game, there will be much improvement from this point forward."