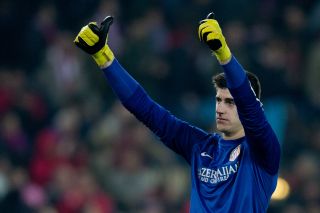 The Belgium international is currently enjoying his third consecutive year on loan at the Liga high-flyers from Premier League title contenders Chelsea.

Courtois left Genk to sign a five-year deal at Stamford Bridge in July 2011, but he has been unable to usurp Petr Cech as the club's first-choice goalkeeper.

Chelsea are understood to be keen on retaining the 21-year-old's services, though rumours have suggested he could move for a fee in the region of €26million.

And Simeone believes the youngster would represent value no matter the cost.

"For me anything we pay for Courtois is cheap," he said.

"He's a young guy with a huge future and is on track to be one of the best goalkeepers in the world.

"Signing a goalkeeper of his calibre would be a big step. It won't be easy. It depends on what Courtois wants.

"We know what the club needs to do but it's not up to us, he's not our player."