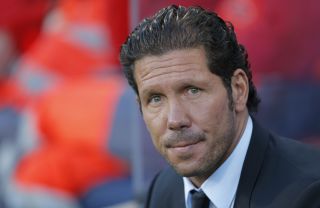 The Spaniard's future at the Premier League club has been shrouded in doubt following the appointment of Jose Mourinho, with widespread reports suggesting he does not feature in the returning manager's plans.

A loan move away from Stamford Bridge has subsequently been touted, with Atletico suggested as a potential destination for the former Valencia midfielder. But, when asked about the possibility of a bid, Simeone refused to be drawn.

He said: "This is what we are always talking about, you (the media) are very knowledgeable and know things that even I do not know.

"There will be movements, whilst hopefully those that come about will be more for players coming in than going out."

"With Raul we gained much aerially in the game and I am very happy with his performance. He lived up to what was needed," he added.

"The introduction into the side of him and Tiago was what we needed. We knew we could beat them in the air and at set-pieces.

"We put a lot of pressure on Rayo for a long time. I believe we created many complications for them and in taking the ball we did a lot of damage."