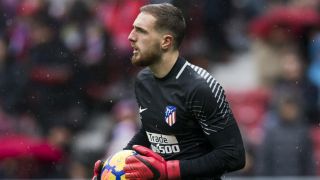 Diego Simeone hopes Jan Oblak is happy to commit his future to Atletico Madrid, after the goalkeeper helped his side claim a 1-0 win over Getafe.

The Slovenia international produced a brilliant save to keep out Faycal Fajr's 77th-minute penalty and ensure Atletico left Coliseum Alfonso Perez with all three points.

Oblak has been linked with the likes of Arsenal and Liverpool but Simeone is eager for him to stay in the Spanish capital, where he has developed over the last four years into one of the world's best players in his position.

"I'm happy to have Oblak with us," Simeone told a news conference. "He came with a lot of excitement, it was tough for him to train with the team and now he's among the best goalkeepers in the world.

"Hopefully, we'll have him with us and he'll be happy here, because all the great teams need a great goalkeeper."

Atleti fielded a strong starting line-up for Saturday's game, despite the Europa League final taking place in only four days' time, with Koke scoring the only goal of the game eight minutes in.

The midfielder was used in a more unusual number 10 role behind Antoine Griezmann and Diego Costa, but Simeone would not say if he will repeat the tactic against Marseille on Wednesday.

"We only had the league on our minds. We don't know any other way to compete," he said.

"We settled a tough game against a competitive team. At the start, we were able to surprise them with Koke as a playmaker and we disorganised their defence. We had a great first half.

"We've played with every system this year. We'll play the game [on Wednesday] in a way the team needs.

"We're going to face an opponent with very important players in midfield. They'll be up for it and I'll choose the team based on that."