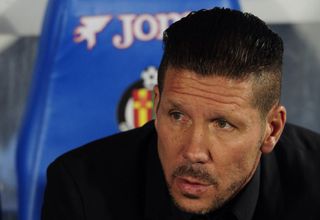 However, that did not stop the likes of Diego Costa and Filipe Luis from departing the Vicente Calderon, the duo opting to join Chelsea.

Atleti head coach Simeone expected there to be changes at the club due to the financial strength of other teams.

"I wasn't surprised because we were a team that exploded last year and there are clubs with more economic power than us," he told Cadena SER.

"They have the ability to choose the players they want and that's OK. A lot people get confused by saying it's unfair that they have to leave, but that's the nature of this profession.

"It's alright for anybody to want to grow as a footballer elsewhere, so it's neither good nor bad."

Simeone insists that he is gets additional motivation by the changes to his squad.

"You have to assess them on how they performed when playing for your team," he added. "All of them, from Radamel Falcao, Diego Costa, Filipe, those of them who decided to leave behaved like men and professionals.

"But it's a situation that motivates me twice over and makes me come alive. It's good to see new faces arrive.

"That's not to say we wanted Costa to leave, but what can you do? You stop living off your memories then go and win the Supercopa against Real Madrid, which is what I prefer."