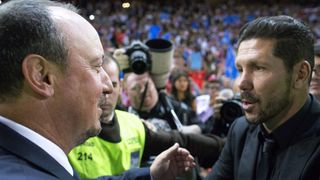 Benitez was axed by Madrid president Florentino Perez on Monday after only 18 La Liga matches in charge at the Santiago Bernabeu.

Atletico lead the table and have a four-point advantage over their struggling local rivals, who sit third.

Simeone was disappointed to see Benitez removed and wished him well, while also congratulating successor Zinedine Zidane on his rise to the top job.

"Whenever a fellow coach is sacked it is not good for any of us, it hurts," he said.

"You just have to accept it because it is part of the game. I wish all the best to the coach coming in and every strength to the coach on his way out."

Atletico visit Rayo Vallecano in the first leg of their Copa del Rey round-of-16 tie on Wednesday, with Simeone revealing Matias Kranevitter and Augusto Fernandez are likely to make their debuts.

Fernandez was signed from Celta Vigo this month while Kranevitter joined the club last August, but was loaned back to River Plate in the second half of 2015.

"Augusto was playing at Celta and he will have no trouble playing and Kranevitter is ready to play if all the paperwork is done," the coach said.

Simeone does not think Rayo's style will change after beating them 2-0 in a La Liga match last week and warned his players of their opponents' quality.

"They are a team who attack, they have scored in almost every game," he said.

"I cannot imagine differences in the opponent with respect to our league match. There are teams that are very clear in how they play and one of them is the Rayo."

In-form Atletico have won 11 of their last 12 matches in all competitions.