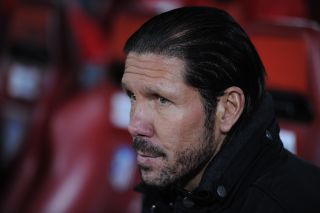 Victory over their city rivals means Atletico remain joint top of La Liga with champions Barcelona on 54 points after 21 games - an "amazing" achievement, according to Simeone.

Arda Turan struck twice after David Villa had opened the scoring on Sunday, with an own goal completing Atletico's win, but midfielder Tiago suffered an injury before the game and Oliver Torres dislocated his shoulder shortly after coming on as a second-half substitute.

And Simeone was effusive in his praise for the way his team dealt with these setbacks.

"We got a very positive result because from the beginning there were complications to Tiago before, then the penalty, with the other injury to Oliver (Torres). But this team is full of men," he said.

"We will now hope to have a good match in Bilbao (in the Copa del Rey on Wednesday) and work the following week because every game is important.

"The team is working extremely well. We have 54 points, an amazing thing. It is very good for the team.

"Oliver has a dislocation. He's young and strong, and is recovering well. Tiago suffered a minor annoyance and did not want to risk it. On Wednesday he'll be fine."

Atletico's next Liga game sees them welcome Real Sociedad to the Vicente Calderon on Sunday.