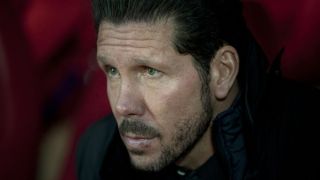 With table-topping Barcelona held to a 1-1 draw away at Valencia, the Argentine coach's side moved to within two points of the summit.

However, the 45-year-old insisted Atletico are holding only a short-term view of proceedings at the top of the table and would not be drawn into suggesting they have a shot at finishing first ahead of Barcelona and Real Madrid, as they memorably did in 2013-14.

"We understand the championship in special way," Simeone said.

"We think the best look to the future is regarding the present. That's our aim. We will not change our mind-set as it is essential for us."

Diego Godin opened the scoring at Estadio Nuevo Los Carmenes and dedicated the goal to injured Portuguese midfielder Tiago, who suffered a broken leg against Espanyol last weekend, by holding up his shirt.

"You know we love Tiago. He is a key part of our family and obviously guys have wanted to dedicate the goal to him," Simeone said.

"He is, firstly, a wonderful person and also an important player of our family."

The Argentine was pleased with the defensive effort shown by Antoine Griezmann – scorer of the second goal - stating his work in tracking back helped to make the team strong.

"[Defence] is one of our strengths. It is owed also to our strikers," added Simeone.

"Griezmann scored a nice goal but he also fought a lot, and this is very important because it passes to the rest of team mates.

"When you see your striker scoring but also doing his best in defence it is the way to build something important. We are looking to carry on growing in this way."