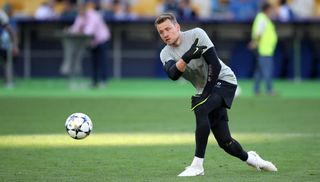 Liverpool manager Jurgen Klopp insists second-choice goalkeeper Simon Mignolet is staying at the club this season despite the Belgian having concerns about his pitch time.

The 31-year-old lost his place to Alisson Becker last summer with the Brazil already proving good value for his £65million fee after playing a key role in their Champions League victory and finishing the campaign as Golden Glove winner with 21 clean sheets.

That restricted Mignolet, with 204 appearances for the Reds, to just 180 minutes last season and despite having two years left on his contract the Belgium international wants to play first-team football.

His attitude and professionalism last season was praised by Klopp and his backroom staff and the manager said he will be staying this summer.

“I’ve had a lot of conversations in the last couple of years, months – not weeks. Before we left (for the summer break) we had talk. I would say yes (he stays).

“At a club like Liverpool you need two number ones in the club and we have that with Ali and Simon.

“It’s a good situation for the club and a situation you should have and that’s why everything is fine from my point of view.”

While Klopp feels he has plenty of strength in his top two goalkeepers he has issues below that top tier with 20-year-old Caoimhin Kelleher facing up to six weeks out after wrist surgery, Vitezslav Jaros, 17, out for several weeks with an elbow ligament injury and Polish youth international Kamil Grabara yet to report back for pre-season training.

With Alisson also still to return after his Copa America triumph with Brazil, former Preston goalkeeper Andy Lonergan, released by Middlesbrough at the end of the season after a loan spell at Rochdale, has been brought in for the club’s tour of the United States which begins on Tuesday.

The 35-year-old is not signing a contract but it is understood Klopp and goalkeeping coach John Achterberg feel they need someone of a decent standard to play in training.

Lonergan may also be retained for the training camp in Evian when the squad returns from America a week on Thursday.