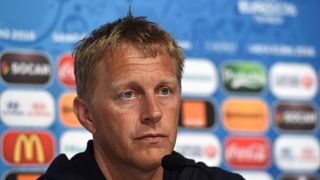 Heimir Hallgrimsson has no problem with Iceland's playing style being labelled simplistic ahead of their Euro 2016 quarter-final against hosts France.

Hallgrimsson and his veteran joint coach Lars Lagerback will lead the tournament minnows at the Stade de France on Sunday, aiming to continue an incredible run by claiming their biggest scalp to date.

Iceland's uncomplicated and clinical 4-4-2 system has proved effective throughout the tournament, with Hallgrimsson and Lagerback using the same starting XI for each match so far.

Draws with Portugal and Hungary were followed by stunning wins over Austria and England, where long-throw assists from captain Aron Gunnarsson were only part of the story.

Hallgrimsson, who will take sole charge when Lagerback retires at the end of Iceland's European Championship adventure, rejected the notion of pundits showing a lack of respect toward his team.

"No, I wouldn't say that," he told a pre-match news conference. "We play simple if you say we play to our strength.

"We know what we are good at, we know what our strengths are - we play the way that suits us. That's what I call playing simple - playing to you strengths.

"If someone thinks that is boring or it's not good enough, that's their opinion. We know what we stand for, we know what we can do. We just play that way.

"The team is coherent and we play well together. We agree on playing this style of football and we can beat good nations."

Lagerback backed up his younger colleague's assertion by recalling a trip to the nation he recently wrought humiliation upon.

"My first visit to English football was in the 70s. I visited West Ham with the legend that was Ron Greenwood, who later became the national team coach.

"He said something that stayed with me my whole coaching career - that doing it simple is to be a genius."

Hallgrimsson and Lagerback would be worthy of such reverence if they are able to derail France's bid for glory, and they are at least familiar with the concept of helming the biggest match in Iceland's history.

"I think you hit the nail on the head [mentioning] the excitement," said Hallgrimsson, whose team will be roared on by 10,000 supporters amid the French majority in Saint-Denis.

"We are always playing the biggest game of the Icelandic footballing history. We are more used to it the more games we play. I think when we've overcome these obstacles, the other obstacles seem smaller the further we go.

"You can go with a bit more confidence into the next game. When you're an underdog in the game it is really important that you can use all your abilities."

He added: "If you're too excited and stiff you can't play your best part.  I think it's a big part in how we are playing better and better the more we progress. We're a bit more relaxed in each game, with more self-confidence in each game.

"I keep saying that we haven't seen the best game of Iceland yet."