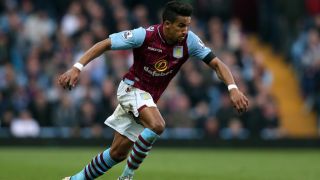 Sinclair, 26, joined Villa on loan in January after a frustrating spell at City and has scored three goals in 10 matches in all competitions for the FA Cup finalists.

With Villa likely to retain their Premier League status, the former England youth international would like to remain at the club beyond the end of the season.

"Definitely, I feel at home at Villa, it's a great club, I'm sure at the end of the season we can sit down and I can sign," he said.

"I just have to wait until the end of the season."

Sinclair returned from a hamstring injury to feature off the bench in Villa's 2-1 FA Cup semi-final win over Liverpool on Sunday.

The former Chelsea and Swansea City man praised his team's character in setting up a clash against Arsenal in the decider.

"We've had a tough time and we've had to dig deep but it brings out the character in us and shows we have the fight to keep going and now we have to take it in the Premier League and make sure we're safe," Sinclair said.

"All we can do is keep going and these are the kinds of games which bring experience.

"In the semi-final, all the team stuck together and gave everything.

"Everyone is driving everyone on, the team spirit in the group is great and when we're going through the tough times we can dig deep."