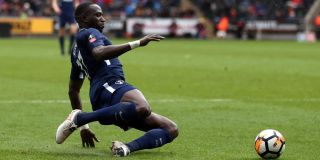 Moussa Sissoko is unconcerned by criticism from Tottenham supporters and has set his sights on a repeat of last season's success.

Sissoko became Tottenham's record signing when he joined for £31.5million from Newcastle United in August 2016 but he fell out of favour with boss Mauricio Pochettino in his first season at the club.

Reports surfaced linking the former Toulouse player with a move away but Sissoko went on to have a much-improved season in his second campaign for Spurs, making 33 Premier League appearances and scoring one goal.

Sissoko accepts he had a difficult start to life at Tottenham but is not worried about the response from some supporters, who booed the 28-year-old during a draw with Southampton last term.

"I came late, I didn't have pre-season and it was a new challenge for me. But last year I played a lot of games and I did well - like the team. This year is going to be the same.

getting ready for pre-season at Hotspur way July 17, 2018

Despite finding his feet under Pochettino, Sissoko missed out on a place in the France squad for the World Cup.

Didier Deschamps opted to leave the midfielder behind and his side went on to lift the trophy without Sissoko, who remains positive about his chances of adding to 53 Les Bleus caps.

"This is life sometimes," he said. "I wanted to be part of this team but the manager decided to leave me out. This is football.

"I was very happy for them. They deserve it. Now I'm looking forward and we will see what will happen.

"My ambition is the same as always: to try to be better and better, to try to improve, to try to help the team to finish higher up the league, try to go far in the Champions League. Try to perform."