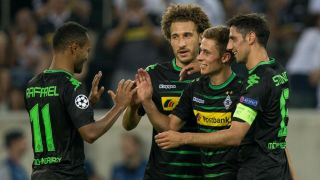 Borussia Monchengladbach were the night's big winners in the Champions League play-offs as Thorgan Hazard and Raffael each hit hat-tricks in a thumping 6-1 win over Young Boys.

The Swiss side already faced a tall order at Borussia Park after their Bundesliga opponents won last week's first leg 3-1, but Andre Schubert's men and his in-form wide attackers were in an unforgiving mood as they achieved the highest aggregate scoreline since the Champions League play-offs were introduced.

Hazard opened the scoring from close range in the ninth minute and Raffael seized upon some slack defending to make it two before converting Lars Stindl's cross.

There were assists from each of the goalscorers to one another as Raffael reached his treble first and, after a booming volley from Yoric Ravet got Young Boys on the scoresheet, Hazard also claimed his share of the matchball.

Late drama saw Copenhagen past APOEL in Cyprus as Federico Santander cancelled out Pieros Sotiriou's opener with four minutes remaining to snatch a 1-1 draw and a 2-1 aggregate triumph.

Dinamo Zagreb needed extra-time to complete their own turnaround against Red Bull Salzburg.

Junior Fernandes equalised in the 87th minute and five minutes into the extra half hour Soudani ensured Valentino Lazaro's first-half opener would count for nothing.

Steaua Bucharest lost 5-0 at home to Manchester City in the first leg of their tie and a second-half header from England midfielder Fabian Delph sealed a 1-0 win to continue Pep Guardiola's unblemished start to life at the Etihad Stadium.