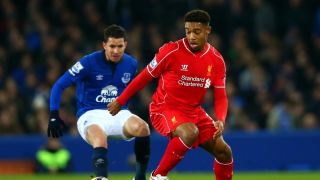 The 19-year-old Ibe impressed at Goodison Park - making only his second Premier League start - and struck the post with a rasping shot midway through the first half.

And Gerrard, after playing in what is likely to be his last Merseyside derby, was thrilled with the display of Ibe, appearing in his first.

"He did fantastic," Gerrard told Sky Sports of his young team-mate. "He only found out he was playing yesterday so to have 24 hours to prepare for a big game like this... he was man of the match.

"A sensational performance and unlucky not to get the winner. Credit to him, he's got a big future and he's going to be a terrific player.

"There were lots of positives - especially this guy. We wanted him back [from a loan spell at Derby County] because of how good he'd done and if he keeps performing like that, we'll do well."

Gerrard conceded he would miss visiting the home of Liverpool's near neighbours.

"I love playing here, it's a great stadium and I've got some good memories," he said.

"I will miss coming here and the Merseyside derbies. Hopefully there's one more left in the Europa [League], we'll have to wait and see."