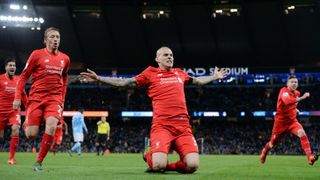 Martin Skrtel would be happy if Liverpool could play Manchester City every week following their 4-1 win at the Etihad Stadium.

Jurgen Klopp's side recovered from defeat to Crystal Palace last time out with an impressive display of counter-attacking football securing victory on Saturday.

The Slovakian centre-back rounded off the scoring by netting his fourth goal against Manchester City in the Premier League, more than against any other team.

And given that record, he would be happy to face Manuel Pellegrini's side on a more regular basis.

"It is the fourth goal I have scored against City - I wouldn't mind playing them every week," Skrtel is quoted as saying by BBC Sport.

"The way we played in the first half was brilliant."

James Milner captained Liverpool on his return to his former club.

He was delighted to come away victorious and praised City goalkeeper Joe Hart for his performance.

"City are a top team, they have shown it year on year," Milner added. "We were top class in the first half, it was a brilliant result.

"We had chances to get more but Joe Hart made some top saves.

"It's always strange coming back to a club, I was here for five years and have lots of friends here."