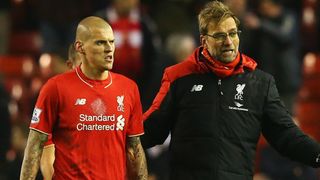 A photograph of Skrtel posted by another account, said to belong to one of the defender's friends, included the hashtag '#KloppJeKKT' in the caption.

'Je' translates from Slovak as 'is a', while 'KKT' is said to be short for 'kokot' - a common offensive term for the male genitalia.

A reply from Skrtel's account then described the hashtag as "top", while further posts made light of the insult.

Skrtel later posted a statement claiming a "close friend" had been overseeing his social media accounts at the time.

"I am truly sorry for the situation and for what was written under my name," he wrote.

"These days, when I am very busy, I have asked my close friend to help me manage my social media profiles.

"He got taken [carried] away and did not realize how serious the comments may appear.

"I would like to stress that the opinion he expressed is not my opinion."

Skrtel, who has been playing with Slovakia in Euro 2016, is expected to leave Liverpool in the coming days to join Turkish outfit Fenerbahce.