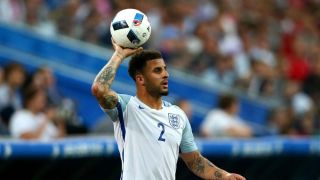 England full-back Kyle Walker says Roy Hodgson's men have "done nothing yet" and is targeting the point they need against Slovakia on Monday to guarantee them a place in the second round of Euro 2016.

Following last Saturday's 1-1 draw with Russia in Marseille, England's hopes of progression appeared slim when they trailed Wales at half-time of Thursday's clash in Lens.

But substitutes Jamie Vardy and Daniel Sturridge turned the match around - the latter's effort coming in stoppage time - to give the Three Lions a 2-1 win and transform the look of Group B.

A draw would be enough for table-topping England to advance but Walker is urging caution.

"We've still not done anything yet," he said. "We still need to qualify but [the Wales win] is a good step in the right direction.

"It'd be lovely [to go through] but it will be a difficult game so we need to prepare. We need to move on and try to get the win."

Walker was named man of the match against Wales, following on from an excellent display against Russia.

"All I can do is go out and perform to the best of my ability when the gaffer picks me," he added.

"Obviously it was great to get the man-of-the-match award but it's a team game."

Slovakia sit third in the pool after beating Russia and a draw may also be enough for them to go through.

Captain Martin Skrtel reckons all the pressure is on Hodgson's men and has questioned whether they have the nerve to get the job done.

The Liverpool defender said: "We want to qualify for the next stage and, in the final game, all of the pressure will be on England because they are the big favourites.

"Can they cope with the pressure? Everything will be decided on the pitch, but I do know that if we show the same heart, character and desire [as against Russia] then we can go through.

"We have to be ready for them - don't forget that England are still one of the best teams in the world. It's going to be tough for us, but I believe we are ready and will get a result."

England skipper Wayne Rooney has caught the eye in a deeper midfield role in the tournament and Skrtel insists he is still the man to watch.

He said: "He has been playing in midfield for Manchester United as well.

"He is a top player and he can play in every single position. We will see where he starts against us and we have to deal with him.

"We have to face him and not just be better than Rooney but better than the whole England team and then we can get success."

- England and Slovakia have met on three occasions previously, with the Three Lions winning all three.
- Slovakia have never kept a clean sheet in a major tournament (six games).
- England have had 21 more shots than their opponents over their first two games at Euro 2016 but have only scored one more goal.
- Marek Hamsik has been directly involved in four goals in his last three competitive games with Slovakia (3 goals, 1 assist).
- If Wayne Rooney plays, it will be his 20th game at a major tournament. Only Ashley Cole and Steven Gerrard have featured more times for England (22 games).