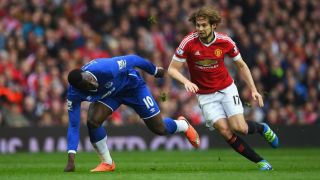 Anthony Martial scored United's 1000th Old Trafford goal in the Premier League nine minutes into the second half on Sunday but much of the emphasis fell on Louis van Gaal's defence.

Smalling and Blind were to the fore as the duo made a host of brave blocks and the latter's withdrawal due to fatigue during the closing stages left United unsteady as Everton pressed for an elusive equaliser.

The win moved United to within a point of fourth-placed Manchester City, who they defeated by the same scoreline immediately before the international break.

"Chris Smalling and Daley Blind have played well together in the whole season and we are very happy with our defenders," Mata told Sky Sports.

"It is a very important win after Manchester City's result yesterday, it was important to get the three points.

"It was very tight, Everton play very good football and have quality players and it is difficult to beat them. We started well in the second half and that was the difference. After the goal it was easier to play because they are more open. 1-0 was enough."

Smalling acknowledged United began to feel the pressure as full-time approached, with little room for error in their bid for a Champions League place.

He told Sky Sports: "The first half we controlled it, but the second half we know there is so much to play for and it did get a bit scrappy.

"We know that we have to win our games because we can't be relying on other teams to slip up."