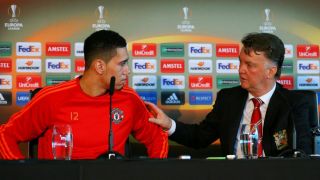 Chris Smalling is not discounting the emotional aspect of Manchester United's Europa League tie against Liverpool in the round of 16.

The old English foes will face off over two highly anticipated legs and Smalling said he was glad to have a tactical manager like Louis van Gaal overseeing the team's game plan ahead of the Liverpool match, admitting that emotion can sometimes take over once the game starts.

Van Gaal has a flawless record against Liverpool and would become the first United manager to record five consecutive wins over the Merseyside club in history should his side take an important away lead from Anfield.

"It's good that the manager sees it from a tactical viewpoint and we work on the training pitch before the game on our tactics so we don't get caught up in the occasion," said Smalling, who may captain United in Wayne Rooney's absence.

"But when you cross over that white line, I think the emotion can drive you on and hopefully bring out a better performance.

"These are games the players look forward to and it's one I'm certainly looking forward to playing in."

Smalling said winning the individual battles would be key to overall success across the two legs.

"I think, quite often, the first 20 minutes can be quite frantic," said Smalling. "But you want to get the upper hand on your opponent, whoever you’re playing against.

"For me, it's the striker. Very early on, you want to get an early challenge in and make sure you dominate."