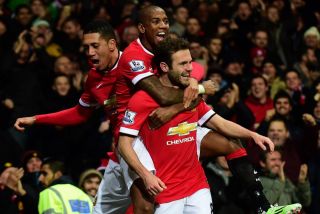 United have won four consecutive Premier League fixtures after they held on to beat Stoke City 2-1 at Old Trafford on Tuesday.

After a difficult start to the season that saw Louis van Gaal's men ravaged by injuries and suspensions, United now find themselves entrenched in the top four, 11 points adrift of league leaders Chelsea from 14 matches.

With renewed confidence and players returning to full fitness, Smalling believes United are capable of overhauling Chelsea, despite the gap heading into Monday's trip to third-placed Southampton.

"After the Arsenal game the next target was six points out of these two games [Hull and Stoke] and we have done that," the England international defender said.

"Now we will work hard because we have got two big games next week [Southampton and Liverpool] and it can put us up there with the boys around us.

"We have felt the old United returning. We could have beaten Stoke more convincingly with the chances we had but it felt the old times, we are really dominating games and creating a lot chances.

"We are starting to get a good number of players that are starting to play regularly and I think it is showing. December is such a busy period. If we can stay like this, pick up a lot of good results and we'll have players back any time now."

Smalling added: "It wasn't a good start to the season and we have still managed to keep ourselves up there. We know we have got a chance and it is down to us to make sure we stay there.

"I think we can get better. We have had two good performances where we have played some good football. If we can keep this run going I think we will get better."